A downloadable rawalrumble for Windows

This early demo features 3 stages (the 2nd and 3rd still don't have final boss and "Romerales" miss an animation), single player or up to 4P multiplayer and an unlockable Survival game mode. The final game will feature 2 additional female playable characters, 10 stages and additional game modes.

F4 (Debug, proto version only): Kills all enemies on screen (use it if an enemy got stuck outside screen, you can't kill him and can't continue).

Grab: Press forward+Punch when very close to an enemy when not performing a combo. Then Punch to Lift, or Kick to Knee. (still doesn't work against players, pink enemies, final bosses). As of now you can't grab Palo, Flama, Romerales and Python.

Floor Attack: Press CROUCH button when over an enemy lying in the floor

Dash roll: Tap and keep pressed in any direction. You can modify the direction while rolling

-You can break some stage background  objects like garbage bins, vending machines or fire extinguishers. They may hide some interesting items inside!

-Use CROUCH button to pick up or leave weapons and PUNCH to use them.

-If an enemy grabs you, spam the attack buttons to escape faster.

-Each monk has kidnapped 3 kids. Save them!

Select/Share/U/-/Back/View: Insert coin, get a credit

This version is designed for 16:9 displays, it may not work properly in other aspect ratios. Please make sure you have the latest drivers installed.

Please send us your (honest) feedback in the comments, specially mentioning details of bugs you may find or suggestions to improve the game.

I like your game. Visually is beautiful but my favorite part is that arcade style it transmits to me.

Hello, from Barcelona too :)

How is going the Rawal Rumble Game? We, our fans, needs some news from time to time, Don´t matter if It is a bit stopped, but tell us something, We, our fans, We will apreciate any comment from You, thanks Team.

Thanks for the kind words and for the video! :)

Reply
Enrique AM2 years ago

Thanks for the feedback!

A great game. One of the best beat em up games I played. Waiting for the full release.

Thank you very much for the kind words and the video. We're still far from completing the game but uploaded a new version of the demo adding some new stuff (mostly things that don't appear in the demo) and fixing many issues.

WTF where have you been all my life? I need this full game and I need it now! Awesome work

In a few days.

I LOVE THIS GAME!!

Thanks, bro! Nice to see you enjoyed it! We take note about the intro texts and the "insert coin" button (this version is supposed to be for arcades, so we still don't have proper PC menus with buttom prompts and so on.

Suggestion: experiment pressing two buttons at the same time to perform special attacks (the main one spends ~30% of health).

For curiosity: What means CRT and TFT? And where are you from?

Hi! We're from Barcelona, Spain. CRT and TFT are display times, because these versions are supposed to be included in Windows PC based arcade machines with a 4:3 display ratio screen. TFT are the modern flat ones, and CRT are the old huge bulky ones (cathodic rays instead of liquid displays).

The game demo itself is just the same. By pressing the F7 key you enable or disable a CRT effect, that we implemented to simulate the look of classic old CRT displays on a modern TFT. The difference between both versions is that the one for CRT displays has this effect disabled by default, when the other one has it activated by default.

I splitted it into two versions because here we wanted to allow the #Arcadecon2019 (an event for arcade related associations, arcade collectors, arcade game devs and related press) people to test it in a CRT display because we don't have any CRT available here right now, but we plan to release an arcade version with CRT display too.

I understand. Thanks.
I asked where you from because i'm Brazilian and see you speaking portuguese. Just for curiosity =)

Alright guys here is the thing I reuploaded it to Brawlers Avenue. So stay tuned Nov 29th 9:00 am.

its now up and as I said to Din( creator of the youtube channel) your game is getting better and better.

any chance this will get released on the linux platform? would definitely buy it on linux

Yes, we aim to release it on Linux too.

This is crazy fun, especially with a second player. Had no idea there was a friendly fire mechanic and it really added a lot to the goofiness. We missed a lot of the story but that didn't stop us from having a grand ol' time! Looking forward to later builds!

Had fun with the demo. Can't wait to see more. Keep up the good work. And really nice job with the CRT filter. I usually don't like that but with RR it works. :)

Thanks for the video! 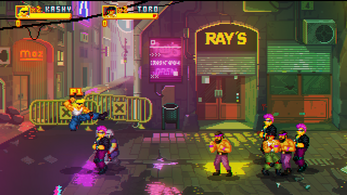 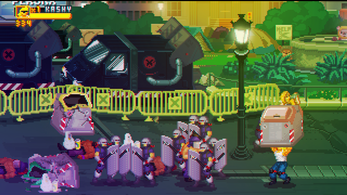 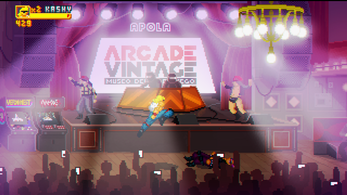 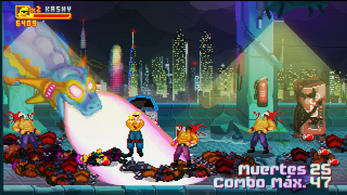